Technically there are four seasons in Kerala even though seasonal changes are not much noticeable. That gives the impression that there is only a rainy season and a hot season.

It is better to know when the heavy rain is because not much of sightseeing is possible during days of intense downpour.

The ideal is the period in between, when the rains have stopped and the heat is yet to climb up north of 30 ˚C.

For these reasons, the best time to visit Kerala is the months of November, December and January.

February is a bit hotter, still a good time to visit Kerala.

Let us have a closer look at Kerala weather patterns.

Let us start with June because it is a period of great change, with regards to life in Kerala.

After two months of holidays, schools reopen in the first week of June. At the same time, the rain also starts, bringing an end to a prolonged dry season.

Rain in Kerala means the real deal. Nature pours down with all its fury. And there are two monsoons too. 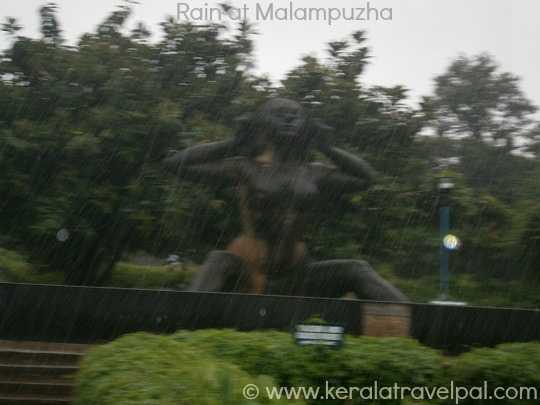 Traditionally, June and July are the peak months of Southwest Monsoon. It weakens during August. As a result, August have a mix of rainy and sunny days. September is mostly sunny, even though there are some scattered rains.

Well, that is how it is supposed to be. Last few years have seen almost dry days of June and July followed by wet Augusts and Septembers.

It is better to keep all confusions away by saying that June to September in Kerala is a period of scattered rains, with a few weeks of heavy rains in between.During this period, temperature hovers between 22 – 28˚C.

October and early November are the period of evening rains. North East Monsoon causes them. The days unfold sunny and nice with no hint of rain. Suddenly clouds start to gather followed by quick downpour accompanied with lightning and thunderstorms. These out of the blue rains extend through night. And the next morning is nice and sunny again, with no hint of rain.

November is generally a good period for travellers, except for a few wet evenings. During November, rains stop and dry period sets in.

December to February is the winter.

During December, the only manifestation of winter is cooler mornings. The days are hot, with temperatures ranging between 22 – 32˚C.

January gets less cool mornings and increased temperature during day time. Some areas also get some windy days, with vortex of dry wind carrying with it dust and small bits and pieces.

From February to May, it gets increasingly hot. March is the cruelest month in Kerala. April and May although very hot may have some respite thanks to summer rains.

Nevertheless, these rains are unpredictable and nowhere near to bring a relief. Sometimes inadequate raining causes the humidity to even go up leaving a feeling of suffocation.

Also there is weather difference between the high lands and the rest.

The higher areas on Wayanad and Idukki are usually several degrees cooler than other parts of Kerala.

Climatic patterns used to be very accurate in my childhood. Rain cycles used to happen in precise time so that farmers had evolved their life around them. Now in the last decade or so, Kerala weather has changed.